Augustus Washington (1820/21-1875) was “the son of a South Asian immigrant” a formally enslaved black Virginian, according to this article published in The Dartmouth Alumni Magazine this spring. Washington studied at Dartmouth, entering with the class of 1847. There, on the Hanover, New Hampshire campus, Washington learned how to make daguerreotypes. Washington and Dempsey R. Fletcher were the only students of African descent at Dartmouth in 1843-44.

Washington’s portrait of John Brown (circa 1846-47) is well-known. Yet there are no confirmed images of Washington himself. Photo historians have been searching and writing about Washington for decades, and the published literature on Washington continues to grow. 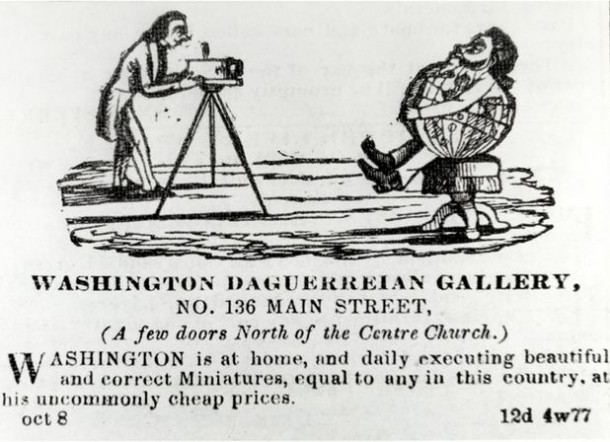 “Advertisement from The Hartford Daily Courant, October 8, 1852. This ad shows the world having its picture taken at Washington’s studio.” – Image, Connecticut Historical Society

Wilson Jeremiah Moses’ Liberian Dreams: Back to Africa Narratives from the 1850s (Penn State University Press, 2010) provides the opportunity to hear Washington’s voice through his written words. Before his migration to Liberia in 1853, Washington wrote this letter to an US newspaper. In Liberia, Washington was a photographer, a sugar cane planter and landowner, and a politician. (Washington’s Dartmouth classmate, Dempsey R. Fletcher, mentioned above, also had lived in Liberia as boy and returned there after studying at Dartmouth.) The African Colonization Movement is a complex subject, and Washington’s images of its key figures helps us think about “what” Africa was and is.